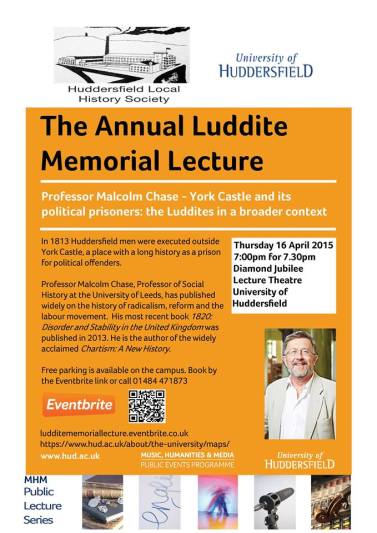 The second Luddite Memorial Lecture – a joint Huddersfield Local History Society/University of Huddersfield venture, was held at the University on 16 April 2015. It starred Prof Malcolm Chase of Leeds who spoke on ‘York Castle and its political prisoners – the Luddites in a wider context.’ Malcolm Chase is best known for his ‘Chartism – a new history’ and for his in depth study of 1820 and the threat posed by discontent to the government of the day, including uprisings in Huddersfield and Barnsley, which is soon to appear in paperback. Here I will forgo a grouse about the cost of academic books, since the hardback edition costs a small fortune.
This is the fifth time I have heard Malcolm speak and as usual his talk was both very informative and entertaining. Above all, for me, it was also politically relevant, in that it demonstrated the continuous development of the state apparatus in quelling dissent from mediaeval times to the 20th C.
The speaker’s point of departure was not the Luddite executions but the ‘Pilgrimage to York’ organised by the Ten Hour movement led by Richard Oastler, when in Easter 1833 thousands of working men women and children marched from the manufacturing districts to York Castle in support of their demands to limit the hours of child labour. This was just 20 years after the execution of the 17 Luddites (or Luddites and burglars using the cloak of Luddism) and Malcolm asserted that among the protestors from the Huddersfield area there must have been many for whom York still held that association, through common knowledge, as relatives of Luddites, or even some who had participated in Luddite activities. For those of us who still vividly remember the Miner’s Strike of 1984/85, although 30 years ago now, it seems more than likely that such a dramatic, and indeed traumatic event in people’s lives as the Luddite executions would have been embedded in popular consciousness and would have been recollected by some. As I have mentioned elsewhere however, a culture of ‘omerta’ does seem to have prevailed and there is little evidence of the Luddites being publically discussed at this time. (1)
Having set the scene at York Castle and established its significance in the Luddite story Malcolm recounted not only a brief history of its political inmates but also described the physical evolution of the Castle as a gaol, illustrated by some fascinating slides including an early aerial view. The site, familiar to us today as Clifford’s Tower, the adjacent massive car park and the elegant square bounded on three sides by the Castle Museum and the Law Courts was, in the 19th C, surrounded by a massive curtain wall and accessible only via a formidable towered gate house. Also in the early 19th C a state of the art panopticon prison was built on what is now the car park.
Malcolm described how Clifford’s Tower probably owed its survival to its utility as a gaol when the rest of the Norman castle had been demolished. Since at least the early 13th C it had housed enemies of the Crown including Irish, Scots and French. In the 17th C both opponents of the Monarchy and the Commonwealth, including many Quakers had found themselves in the Castle, though which part of the physical structure was used for their incarceration I either missed or Malcolm failed to specify.
Here Malcolm pulled out of the hat one of those interesting historical coincidences that makes the subject so delightful even if it explains absolutely nothing. Most of the Luddites were hung on 16 January 1813. On the same day in 1664 there was another mass hanging – 16 men implicated in the Farnley Wood plot, a republican attempt to overthrow the restored monarchy of Charles II. Unfortunately, this is not our Farnley Wood near Huddersfield (although there was some local involvement in the rising) but Farnley near Leeds, otherwise the coincidence would have been even more poignant. However the plot did focus on the woollen manufacturing areas, as did the Luddite rising. It would have been interesting to know the occupations of those executed in 1664. Indeed, two men executed on Attercliffe Moor for their part in the plot were recorded as a clothier and a cloth dresser.   (2) But this date was no more than a coincidence and reporting on the Luddite executions in 1813 one newspaper recapitulating other mass executions at York remained oblivious of the Farnley Wood rebels.
The Jacobite rebellion also produced its martyrs at a time when the mediaeval practice of mutilating the hanged men still remained in force. Over 250 were held in York and 22 were executed, the heads of two being stuck on Micklegate Bar where they remained for ten years. Malcolm did describe some other executions as well as the loathsome conditions in the gaol in the 18th C which, being a sensitive soul, I decline to repeat.
As well as Jacobites at least one prominent ‘Jacobin’ as the authorities dubbed him was incarcerated twice in York on the 1790s. James Montgomery (who had previously been an apprentice baker in Wakefield) was indicted in 1795 for writing a subversive poem about the fall of the Bastille and for criticising the shooting down of protestors the following year. Malcolm contrasted the harsh treatment of the Luddites in 1813 with that of the Yorkshire rebels of 1820, when participants in the Grange Moor rising had their death sentences commuted to transportation. This he attributed to a reluctance to exacerbated a dangerously tense political situation which he claimed posed the biggest threat to government since the Jacobite rebellion or subsequently – including the 20th C. In Scotland however three insurgents were executed, creating martyrs that are still remembered today. 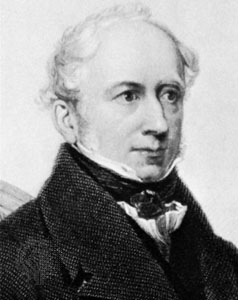 Here I have to point out Malcolm’s most serious omission, – a failure to mention the Huddersfield uprising of 1817 where, again, this time mainly due to revelations that a government provocateur had been at work, those arrested were released after trial – apart from Tom Riley who committed suicide in his cell. Since Riley was one who ‘had form’ as a Luddite suspect in 1812/13 his story is a good example of the likely continuity from Luddism to later Radical activity as well as being a personal tragedy that throws light on the conditions of prisoners.
York also held its quota of radicals from the 1830s and 40s, like Joshua Hobson, Huddersfield’s campaigner for the liberty of the press and many Chartists including Feargus O’Connor. However Chartists often served their terms in Northallerton gaol, noted for its harsh regime which resulted in the martyrdom of Samuel Holberry of Sheffield.
York does not seem to have been used for political prisoners in the later 19th C although during the first world war it did hold interred enemy aliens – so many if fact that some had to be accommodated in tents in the grounds.
Malcolm closed with the reflections that York’s political prisoners are not remembered in the city, dominated as it is by a twee heritage industry geared to tourism, which sees Dick Turpin, a petty gangster, as more sellable than radical heroes. He closed with an account of the 2013 Luddite commemoration at York which marked the site of the executions outside the walls of the Castle, now by a busy ring road, with no permanent memorial to the Luddites or to any of the thousands of political prisoners who had passed through that grim place.
The talk was not only a fascinating overview of the workings of the British state through the ages in one locality (which brought out York’s role as de facto ‘capital of the North’), but also a tribute to all those who have fought, lost their liberty and often their lives in the fight for freedom as they saw it at the time. Yorkshire should have a fitting tribute to its radical martyrs and there would be no better site for it than York Castle.  Malcolm’s talk could help kick start that discussion if we as historians and activists carry on the task of bringing our radical history to a wider audience through such popular events as the Annual Luddite Memorial Lectures. 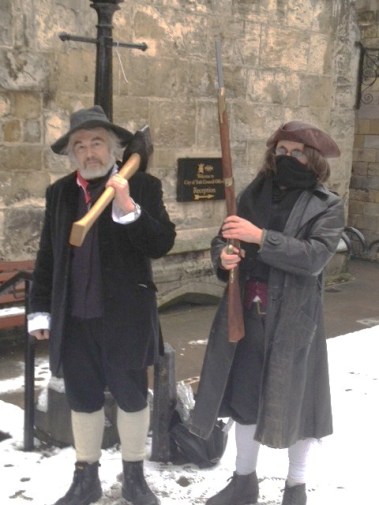 Outside York Castle commemorating the execution of the Yorkshire Luddites .January 2013

The text of an earlier version of this talk, delivered at the York Luddite Commemoration in 2013 can be found at:
https://yorkalternativehistory.files.wordpress.com/2013/02/political-prisoners-in-york-castle.pdf

This article was originally published on Luddite Bicentenary, to further illustrate a post on the letter written by the Luddite George Mellor, whilst he was imprisoned in York Castle, awaiting trial.

George Mellor’s letter from York Castle was addressed to Thomas Ellis, a woolstapler, of Lockwood. Whether the survival of only copies indicates that the original was allowed to reach its destination is not known. The Home Office copy also names the intended recipient as ‘Hellice’. This spelling may have been used on the original if, as seems likely, the letter was passed by Mellor to someone on the outside with verbal instructions as to the address. END_OF_DOCUMENT_TOKEN_TO_BE_REPLACED 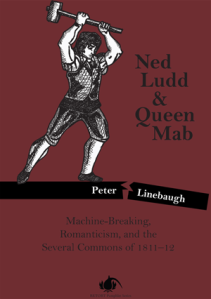 The bicentenary of the Luddite risings has produced disappointingly little new academic research on Luddism. However, this booklet of only 40 pages goes some way towards filling that vacuum. Based on a lecture he delivered to a conference to mark the bicentenary held at Birkbeck College in 2011, Peter Linebaugh sets out not only to rescue the Luddites from the ‘condescension of posterity’ but also place them firmly in an international context. END_OF_DOCUMENT_TOKEN_TO_BE_REPLACED

Below is a response to the article about the Luddites written by Cambridge University Student Richard Jones and published in the May 2012 edition of ‘History Today’. The article has been written jointly by myself, Luddite Bicentenary author Richard Holland, and the Luddites 200 Organising Forum. As delegates to the Huddersfield University Luddites Conference in May 2012, we were pleased to noticed Richard Jones’ name on the attendance list, but disappointed when he then failed to appear. We were keen to discuss his work with him, and have contacted him asking to see his research. So far, he has not replied to our emails. We look forward to a rejoinder. ‘History Today’ refused to publish even an edited version of this, on the grounds that it included Ad Hominem abuse ! END_OF_DOCUMENT_TOKEN_TO_BE_REPLACED

(A Paper delivered at the ‘Enoch’s Hammer’ conference, University of Huddersfield, 12th May 2012).

So spoke William Leadbeater, a local ‘operative’, (his occupation is not recorded), at a meeting in Huddersfield in 1830. We may laugh at the hyperbole, as did those at the meeting, but this quote illustrates a couple of vital points. END_OF_DOCUMENT_TOKEN_TO_BE_REPLACED

I wrote to the Huddersfield Daily Examiner following their story in the 12th April 2012 edition which adapts the press release put out by Richard Jones, a research student at Cambridge University. He appeared on BBC Radio 4’s ‘Today’ programme yesterday to promote the findings of his research into the Luddites. The letter was also endorsed by Richard Holland of Luddite Bicentenary and David King of the Luddites 200 Organising Forum. END_OF_DOCUMENT_TOKEN_TO_BE_REPLACED